Historians have been able to ascertain that the baccarat game originated in Italy. This earliest references of the game can be traced to a game called Tarrochi which was in vogue during the middle ages; however, this matter is still under debate. Tarot cards were being used to play this game during the middle ages. 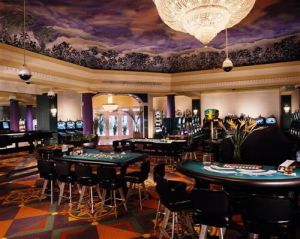 The game of baccarat was introduced from Italy to France when the land was ruled by King Charles VIII. In no time, this game gained widespread popularity and was commonly played in the homes of French nobles and those who prided on belonging to the aristocratic clan. The association with class and style that started during this period continues till date. There is a certain level of eloquence and grace associated with baccarat that is difficult to find in other card games at the casinos.

The rise of the French casinos enabled the common man to enjoy the game of baccarat. Irrespective of their social status and class, French people from all walks of life could try their luck at the game. The popularity that this game enjoyed in France gave birth to a French version of baccarat. It is this version that is played even today.

The birth of the French version

"Chemin de fer", which was the name given to the French version of the game, soon spread to various countries in Europe including the United Kingdom. The British, who already had a penchant for card games, took an immediate liking to baccarat and developed their own version of the game by modifying a few rules. This version came to be known as the "European Baccarat" and reached South America and the United States.

Baccarat's American version also took shape from the "Chemin de fer"; however, imbibed the rules of the European baccarat. The games played at Capri Casino, located at Havana Cuba, are the ones that are being played in the innumerable American casinos today.

Baccarat has now transcended Europe and America and has reached various parts of the world developing different baccarat strategies. A number of people of Asian origin, visiting the famous casinos of Las Vegas, have been seen spending their time at the baccarat tables enjoying their games. In the casinos of Macau, the game of baccarat is played at the casinos without the help of the system used in the casinos of the US.

Right from the time of its inception, baccarat has surely improved in leaps and bounds. Considering that people are gaining interest in this game, this game is here to stay for a very long time.

Bicycle Eco Edition Playing Cards are made of environmental-friendly recyclable materials, lamination was made with glue and ornaments imprinted with vegetable based links.